Thurn & Taxis, the 2006 Spiel des Jahres winner, was one of the first games I purchased when I first got into the boardgaming hobby 10 years ago. It has remained one of my favorites over the years and I believe I’ve played close to 600 games (thanks in large part to Yucata). Although it’s certainly not the ‘deepest’ game, I feel there are multiple layers of strategy to discover and potentially master. There is some luck involved, as with any game played with a shuffled deck of cards. For me, however, the ratio of strategy to luck is just right. On occasion, the extremes of good or bad luck can decide the game, but not often enough for it to bother me.

There are a number of things that most players realize pretty quickly in their first couple plays: 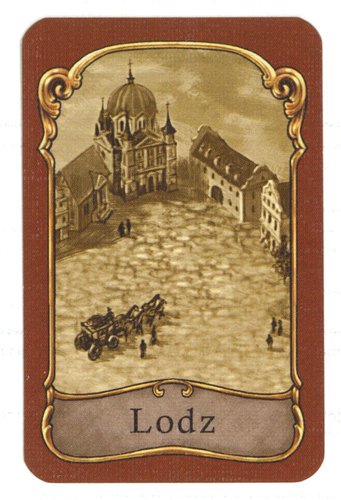 Key Cities and the ‘Around the World’ Bonus Chit – The bonus chit for getting into all colors is an important bonus. Although it’s possible to win without it, the winning player will have one of these chits a vast majority of the time. As a result, the colors with just a single city (Lodz, Innsbruck, and Sigmaringen) are a little more valuable initially. You can also add Pilsen to that list, as it’s the only way to get into Lodz.

Efficiency – An average game of Thurn probably lasts around 17-21 turns. That’s not a lot, so you need to be efficient with your actions and your routes. That efficiency comes in several forms.

When I’m teaching Thurn to a new player I usually incorporate the above into the rules explanation. I consider these the ‘common sense’ that they’ll learn within a game or so anyway.
The rest of this article is my attempt to explain my own personal strategies on different areas and situations.

In a four-player game, you’ll generally go through the deck around two times or so, depending on Administrator use. With only 3 copies of each city in the deck, obviously at least one player will miss out on the key cards the first time through. When the opportunity is there, I will try to make sure I’m working on a route that includes a key city when the first shuffle occurs. Better yet, I’ll also be holding another key city in my hand ready for my next route. I’m often willing to take a tempo hit to extend a route one extra turn to keep a card out of the shuffle, especially if another copy is also out.

In addition, it’s important to pay attention to what routes are in process at the first shuffle to be able to better plan routes for the next time through the deck. It’s not unusual for two copies of a key city to be sitting in front of players at the shuffle. I often see this with Pilsen-Lodz. Unless a player gets both together early, it’s often a player’s second or third route which puts it close to the shuffle. It’s a tough position to need a card with only one available, tougher still when you don’t realize it.

This is an area that I don’t feel a lot of players think too much about, but I consider to be key. No matter where I’m at in turn order, I always have the most impact on the player to my left and the least on the player to my right. Early in a game, I make a conscious effort to work on a route (or start collecting for the next route) that follows my left-hand neighbor. Likewise, I try to stay away from anything my right-hand neighbor is currently working on. I’ve talked to players that think I’m counter-drafting them, but that’s not really the case. I rarely take a card I don’t intend and expect to play. Ultimately, it’s not something you can always make happen, especially if you have a strong right-hand-opponent who is thinking the same way, but I find I’m able to use this strategy to my advantage in a majority of my games. A lot of strategies/tactics I use may only result in small incremental gains, but when the winning scores are in the teens and low twenties, that can make all the difference that’s needed.

Actual turn order does have an impact on how I play, at least at the beginning of the game. Once I see how the other players are playing, that will often impact how I play out the rest of the game. Here are my thoughts on each seat.

Many players think seat 1 is the strongest. You have a head start on being the first player to get one or more of the bonus chits, including the ‘around the world’. You are also initially in control of the pace of the game. When I can get the first color bonus chit after just my first two routes, I’ll usually continue to push the pace of the game.

I consider this the weakest seat and I think statistics from WBC show that to be the case, if only slightly. It’s not as good as seat 1 for chit advantage or pacing and has none of the advantages that I think make seat 3 or 4 better. It’s not enough for me to be overly concerned when I start second but enough for me to be aware that it’s my least favorite seat.

My preference is to go last. There are couple things I think seat 4 has going for it. As I mentioned earlier, I value relative player order pretty highly and the player in seat 4 has the most information to start the game. You know every other player’s first two cards (unless someone draws blind); which card they played first; and most of the cards that will be left on the board to start turn 2. That’s a lot of valuable information to start the game with and getting that information is the primary reason I value seat 4 the highest. Another benefit is knowing when the game will end or, occasionally, being the player in control of ending the game. If you can take the lead in carts, you can potentially force the other players to close their final route prematurely in anticipation of what could be the final turn. This can often earn extra points by picking up a remaining long-route chit.

Seat 3 is not as good as seat 4 in the same way that seat 2 is inferior to seat 1. However, I still really like seat 3. I’m probably in the minority, but I actually put seat 3 ahead of seat 1 in my personal ranking. The extra starting info and the possibility of forcing 2 out of 3 opponents to close their final routes early puts this ahead of seat 1 for me.

Tempo and the Cartwright 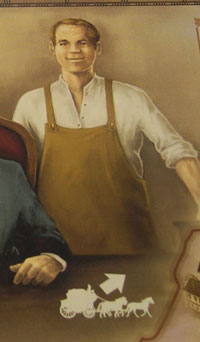 On the majority of your turns, you’ll be using either the ‘Draw 2’ or ‘Play 2’ special ability so it’s fair to think of your turn as having 3 actions. Every city in a route costs you two actions; one to draw the card and one to play it. With 20 post offices, you need a minimum of 40 actions, or 14 turns, to be able to end the game that way. However, you are bound to need to hit a couple cities more than once, adding a few turns to that. If a player is rushing to the 7-cart by using the cartwright, turn 14 is also the earliest that the game end can be triggered. The 7-cart is worth 3 points more than the 6-cart, which is over 10% of most winning scores. It’s another 2 points less for the 5-cart. In addition, the first player to acquire a 7 also gets the 1 point bonus for ending the game so if you end the game while still on the 6-cart, you already have 4 points to make up. I point all this out to stress the importance of keeping pace with the cart leader. Although Thurn is not a race game, it often plays out like one. The cartwright ability serves a couple purposes in relation to tempo – 1) It can help maintain pace with the cart leader; 2) It can help you catch up when other circumstances have caused you to fall behind; and 3) it allows you to get away from small routes while still picking up the next cart. 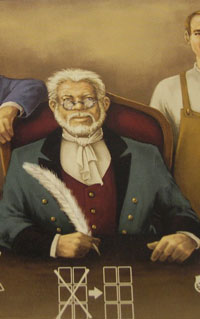 Don’t be afraid to use the Administrator. I’ve seen plenty of players refuse to (or rarely) ‘flush’ the cards because they consider it inefficient or feel that it just helps the other players too much. On its surface, the administrator does “waste” 1 action, by depriving you of the ability to draw or play a city. However, if the ideal cards aren’t there to draw, you aren’t losing a good action. The alternatives are drawing blind off the top or taking a less desirable card for your route, possibly hitting a duplicate city. The blind draw could get you a completely useless card (for the 1 action wasted as using the Administrator) and leaves you in the same position for your next action. That’s not to say there aren’t times to draw blind as well. If there are several connectors that will work and the deck is low and you’re confident there’s a good chance, then go for it. But also pay attention to what cards your opponents are currently looking for. The flush can be used as a good defensive play, getting rid of someone’s key card while improving your own card selection. Similarly, if I notice that there is nothing on the board that connects to the next player’s route, I may be more likely to blind draw, and possibly put them into a position where they need to flush.

Most of these may only result in small incremental advantages, but in a game with winning scores averaging around 20 it can make the difference. While I always keep these strategies in mind, there are times when you need to zig instead of zag. I don’t consider any of these strategies to be absolute. That’s what keeps the game interesting even after so many plays, and the ability to know when to alter your plan is what separates the top players from the rest. It’s no fluke that many of the same people make semis and finals year after year despite WBC fields of 150+ players.

Kyle Smith is unquestionably one of the best Thurn and Taxis players in the world. He won the annual Thurn and Taxis event at the World Boardgaming Championship in 2011 and has since finished in 2nd place twice – in 2014 and again in 2016. He's also made the finals at Euroquest in 4 of the last 5 years (with 2 wins). For a game with as much randomness as T&T this is a truly impressive resume. For whatever it’s worth, he’s also the single player I fear the most whenever he sits down at my own T&T tournament table. While he’s a great guy away from the table, as you’ll read here his in-game strategy is both cutthroat and very effective. - Randy