Through the Ages: Plan A

The new edition of Through the Ages has made it so that there is a primary way to win the game.  Plan A, if you will.  Plan A in Through the Ages: A New Story of Civilization is to hit someone with a war at the end of age III so that when they take their turn, it’s Age IV and they can’t resign, nor can they catch up to you in strength.  It takes advantage of two  rules changes in new TTA:

For the rest of the article, understand that I’m going to explain how you make this materialize, and to talk about the differences between the two games so you can easily transition from the old game to the new game and stay on top of your competition.

The Core of TTA

In Through the Ages, everything is equally important, with military being slightly more equal than the others.  You always have an axis you are weak on that you need to solve, and you want to make sure that you also solve for military while solving for your other weaknesses – ending your turn as the strongest is preferred, but not being the weakest at the end of your turn is nearly mandatory.  The “strength tax” needs to be paid.   Why and how this works out between the two versions is slightly different.

Aggression Cards, Then and Now

Aggressions were often defense card checks, especially early in a game.  A one point strength lead meant you could either: force a discard of a highly sought after defense card , win the aggression, or make them sacrifice a unit.  All of those outcomes were great, so hitting someone hard early was something that was desired – making Caesar the highest ranked leader in Age A.  His extra red dot meant more cards drawn, the ability to hit and keep drawing cards, and a minuscule strength lead good enough to hit someone in round 3 with an aggression.

Aggressions in the new version of the game are quite a bit more deterministic.  The math is easy to do, and red dots define how high you can ever get your strength to.  Being 1 point behind means that the events are going to bite you, but aggressions aren’t going to bother you much.  To the point that fewer aggressions get played if everyone is keeping up with their strength relatively well.  Relatively well is simply measured by this formula: 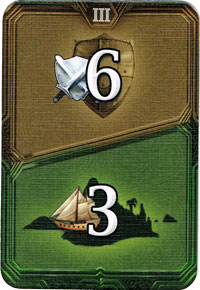 I use the same formula when determining to attack someone or not.  This can change based on the number of defense cards seen, how many of the previous age were used, etc.  Due to fewer aggressions overall, people can be assumed to have a previous age defense card as well, but as per every game of this nature, you must make that judgement call based on what has happened thus far in your game.  But I do tend to not send aggression to people who are safe-ish based on the above presumption.

So Strength Doesn’t Matter as Much Anymore?

No – strength still matters for Plan A.  Strength still matters for events.  You may notice more events getting seeded due to less aggressions being played.  It is still true, however, that at higher levels of play, you’ll see less and less cards seeded during a game.  This is because you tend to be the weakest at the start of each of your turns when playing with good players.  You tend to not to want to seed when you aren’t the strongest unless you have good enough knowledge of what’s left in the deck and have an event or two left in there you really want to see pop before you take your turn.

Tactics Cards and How They’ve Changed 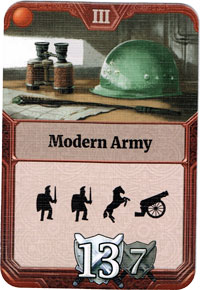 One of the big weaknesses in the old Through the Ages was the Age II tactics lottery.  You wanted to have 3 red dots going into Age II to maximize your chance of drawing a classic army, or perhaps a Napoleonic army as a consolation prize.  Sometimes you just set up your military for whatever and hoped for any (non-fortification) tactics card.  Failing to draw a red card in Age II probably spelled the end of your game.

The attempt to fix this in new Through the Ages was allowing people to copy tactics in play, albeit a turn later, so that the person playing it will get one turn to exploit their newfound strength before others can join in on the fun.  When playing casually, this means everyone will go play their tactic when they can to enjoy the strength benefit for a turn of events, to avoid being last in strength, or to get in one good aggression on next turn before losing the advantage.  Due to this, the number of tactics cards in the deck went down in the newest edition.

Competitively, however – this means there is only one way you want to play with these tactics – on the turn you declare a giant war in your favor.  The best way to execute Plan A involves planning on including the red dot to play your tactic in addition to all the dots you need for your war.

Putting It All Together

So now we understand the value of strength.  The question is, how do you get there?  There are a few key cards to make this strategy work.

First, you NEED red dots.  And you need to deny red dots to others.  So high on the list, for me, is Constitutional Monarchy.  Spend those actions making that happen.  It is just worth it.  Next on the list are the age II/III military techs.  Just because you have Constitutional Monarchy doesn’t mean you can ignore Strategy or Military Theory.  Picking them up denies those reds to your opponents.  Playing them gives you a massive army build-up after a war.

The top of the list, however, is Air Forces.  This card is still as good as it ever was, even with the re-balancing.  You also obviously need to either have the Age II or III military techs matching your chosen tactic. 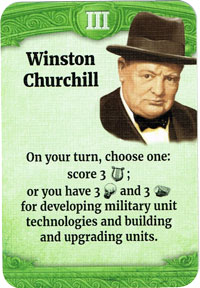 There are ways to shore up your weaknesses if you are unable to pull it all together.  Winston Churchil has the ability to make up stone and science.  Albert Einstein can keep you topped up with the science needed, provided you can find a Computers card.  Yellow cards abound to help make up the stone issues.

One thing to keep in mind is that while having food so you can keep increasing your population and shoving them into the military is nice, it isn’t needed.  You’ll just need enough white dots to fire everyone and the red dots to  move them over in the second to last turn.  There have been many games where I’ve ended with 1 farmer and a priest or two, with everyone else conscripted into the army.

In conclusion, strength is even more important in the new version of Through the Ages than the previous edition.  You will want to get your strength to 80 to 90 and declare a war on the penultimate turn to maximize your points.  It’s not really fun, and it feels a little dirty.  But it is how you win.  Or at least, how you should be planning on winning.

Sceadeau is one of the most feared tournament boardgamers around. He won the coveted Siegelman at Euroquest in 2009 and finished 2nd in the race for the Boardgame Players’ Association’s Caesar award last year. He’s also been a member of the winning team in the team competitions at both Euroquest and WBC. While Agricola is probably the game Sceadeau is most well-known for (and he does lead the all-time Laurel count in Agricola by almost 50%), he has also been amassing very impressive finishes at Through The Ages – the other most “shark-filled” event every year at WBC. He’s made the final table in 4 of the past 5 years so when he tells you the secret to the new version, it makes sense to listen! - Randy