The Game: Lords of Waterdeep

Lords of Waterdeep is a worker placement game for 2-5 players which was released in 2012. It has become a standard at open gaming events and tournaments.

Players gain points or resources through completing quests, constructing buildings, playing intrigue cards or having other players utilize the buildings you have constructed. At the end of 8 rounds of play, the player who has accrued the most points wins the game.

You are playing: Red 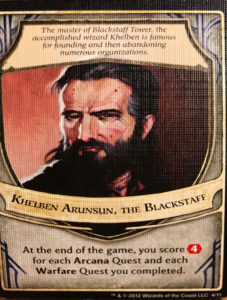 Your Lord is: Khelben Arlinsun who rewards Arcana and Warfare.

On hand you have:

You are playing a 4 player game, currently in the 5th round

Black has completed four quests, two of which are plot quests

Blue has completed one quest, which is a plot quest

Green has completed three quests, none of which are plot quests

With your first agent, you have played on the middle slot of CliffWatch Inn, and collected your Intrigue card. You are deciding which quest to take.

Since your lord card rewards Arcana quests, you are looking at the two available Arcana quests and trying to decide which to choose.

Explore Arghairon’s Tower requires one purple cube, two black cubes, and two money.  It is a plot quest which gives an immediate reward of 6 VPs, but also lets you draw an intrigue card whenever you play a purple cube. 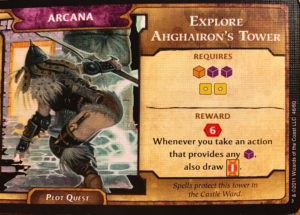 For more about the game, view the BGG page at: https://boardgamegeek.com/boardgame/110327/lords-waterdeep

All images copyright Wizards of the Coast